The mystique of Aksum

My local guide in Aksum (also spelled “Axum”) told me there are no mosques in the city. When Muslims ask why this is so, the local Christians reply, “When  Muslims allow churches in Mecca, we’ll allow mosques in Aksum.”
Aksum is the holiest of cities for Ethiopian Orthodox Christians. It was the seat of the earliest Ethiopian monarchies – as long as we don’t count the ancient kingdom of Cush as “Ethiopia,” but that’s another story. According to Wikipedia:

The original capital of the Kingdom of Aksum, it is one of the oldest continuously inhabited places in Africa. Axum was a naval and trading power that ruled the region from about 400 BC into the 10th century. In 1980 UNESCO added Aksum’s archaeological sites to its list of World Heritage Sites due to their historic value…
The Kingdom of Axum had its own written language, Ge’ez, and developed a distinctive architecture exemplified by giant obelisks, the oldest of which (though much smaller) date from 5000–2000 BC. The kingdom was at its height under King Ezana, baptized as Abreha, in the 4th century (which was also when it officially embraced Christianity).

Today’s Ethiopians consider themselves the descendants of the Aksumites, even those who belong to the more southern tribes. I think this is akin to Americans referring to our “founding fathers” even if their actual ancestors only arrived in America a hundred years ago. Or modern Jews referring to the biblical patriarchs as “our patriarchs,” even when it’s obvious that many of today’s Jews are descended from converts. They’re our cultural/spiritual forefathers.
The language of the ancient Aksumites was Ge’ez, and modern Amharic Ethiopians consider Ge’ez to be the ancestral language of Amharic, even though the truth is much more complicated. Tigrinya is widely spoken in some parts of the north, and it is more clearly derived from Ge’ez. But there will be other posts on the languages of Ethiopia, so I won’t delve into this subject much here.
Of course, when I visited Aksum, I saw its famous obelisks:

Right next to this archeological site is a museum. The old man in charge of the museum gave me a tour, and I found some of the exhibits very interesting. Some of the Aksumite coins were so small they were hardly the size of grains of rice, and yet they were engraved; one needs a magnifying glass to make out the design. Unfortunately, photography is not allowed in the museum.
The museum’s walls are decorated with large murals depicting Aksumite kings and their soldiers and subjects. I couldn’t help but notice that these ancient Aksumites are shown as having olive complexions and Middle Eastern features, so I asked the guide about this. He took my arm, pointed to it and proclaimed, “The ancient Aksumites were your color. This is in our history and our tradition.” As for modern Aksumites, and Ethiopians in general, he echoed what I’d heard previously: “We are a mixed people.” I didn’t notice any difference, in appearance, between today’s Aksumites and other Ethiopians.
Also near the ruins is a gift shop. Among the various souvenirs being sold was an old Bible manuscript on parchment. Having a weak spot for old books, I haggled the vendor down to about half of what he was asking, and bought the manuscript. Soon enough, it became clear that such manuscripts are sold everywhere there are tourists, on the streets, in shops and in hotels. People continued to use manuscript books, in this part of the world, until fairly recently. So they are definitely not rare. I’d say this one is about 200 years old. Here’s a page from it: 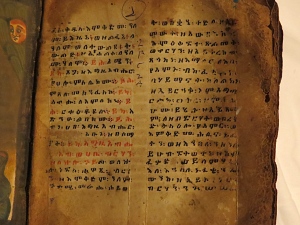 Later, I saw a sign (inside the tourist office of the Simien Mountain park) warning tourists not to buy such manuscripts. It stated that they are sometimes stolen, and that they’re illegal to take out of the country. I was told that if I got it from a reputable dealer, and got a receipt for it, that it probably wasn’t stolen – but I couldn’t get a straight answer about removing it from the country. Apparently, it’s up to the whim of whatever customs officer is in charge at the airport at the time.
All shops in Ethiopia are required to provide receipts to their customers, and they certainly do; the government sends secret shoppers to make sure that such receipts are issued, so that taxes can be withheld. If the Ethiopian government really cared about manuscript bibles being sold to tourists, they wouldn’t allow them to be openly sold the way they are; they’d enforce the law the same way they do when it comes to sales tax. Instead, they allow them to be sold to tourists – and then, after the fact, warn us we may not be allowed to take them home.
As it turned out, there was no problem taking my manuscripts (I later bought another, smaller, one) out of the country. Nobody even asked. What I bought was old books, not national treasures – and they are certainly not rare.
Near the obelisks are also some underground chambers and temples, some Christian and some pre-Christian. Some of the stonework reminded me of the better Inca stonework one sees in Machu Picchu or Cusco, though this is much older:

I’ll conclude with a modern Aksumite girl selling guavas, which were very tasty:

This entry was posted in travel and tagged Aksum, Axum. Bookmark the permalink.

8 Responses to The mystique of Aksum