There are many important archeological digs in Ethiopia. One of these sites is Melka Kunture, which we (I was with a British tourist) visited. The site features a museum, which consists of several modest structures and some replica bones.

We took a boat trip on Lake Ziway, and saw many interesting birds. 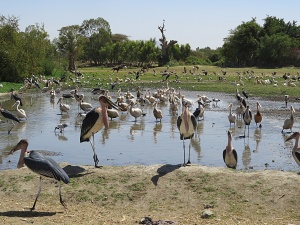 We stopped at an island, and hiked up to a popular church. On the ascent, we passed a hut, and the woman who lived there gave us some homemade injera.

The injera was on the gritty side, but the woman’s smile made it delicious. Here’s the church: 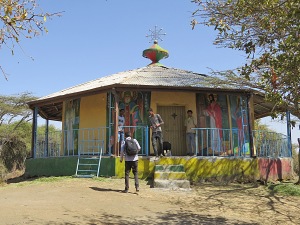 I wish I could remember the name of the rock-hewn church we visited. It’s south of Addis Ababa. Perhaps somebody will recognize it and help me out: 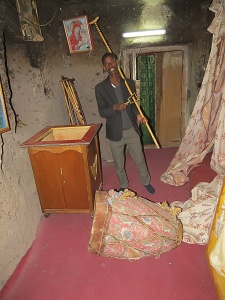 We stopped at a fish market, whose location I also can’t remember: 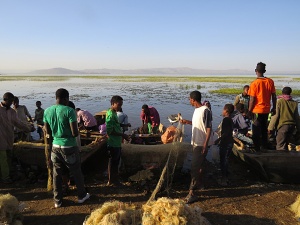 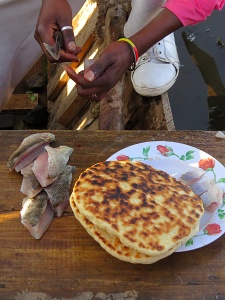 At one point, we stopped at a restaurant by the side of the road. When they brought us the menu, it was covered with a multitude of small spiders! I guess you could say that spiders were on the menu. I tried to order several items, but each time they told me they don’t have that item. It appeared that all they actually had was spaghetti – so that’s what I had. I was hungry, so I tried not to think about the spiders.
As we were about to leave, I noticed that they did have one other item available: Raw meat.
[youtube https://www.youtube.com/watch?v=c9iZ6DgIedA&w=560&h=315]

This entry was posted in travel and tagged Ethiopia, raw meat. Bookmark the permalink.